The Basics of Multiple Compressor Control

These controls use the on-board compressor controls’ microprocessors that are linked together to form a chain of communication that makes decisions to stop/start, load/unload, modulate, vary displacement as well as speed. Usually, one compressor assumes the lead role, with the other being subordinate to the commands from this compressor.

Less sophisticated network controls use the cascade set point scheme to operate the system as a whole. Those systems are capable of avoiding part load compressors, but can still present the problem of approaching the production’s minimum pressure requirement as more and more compressors are added and the range of compressor load and unload set points increase.

The more sophisticated network control systems use single set point logic to make their operational decisions to start/stop, etc. In systems with positive displacement compressors (rotary screws, reciprocating compressors), all compressors are kept fully-loaded except for one compressor that is operated in some part load fashion specific to the design of the machine.

If complexity outpaces the capabilities of local and network controls, system master controls coordinate all of the functions necessary to optimize compressed air as a utility. System master controls have various functional capabilities, including the ability to monitor and control all components in the system as well as trending data to enhance maintenance functions, at the same time minimizing costs of operation. Other system controllers, such as pressure/flow controllers, can also substantially improve the performance of some systems. System master controls interface with all brands and types of air compressors, and can coordinate the operation of satellite compressor rooms spread around the facility or in different buildings across an industrial campus.

The primary of these controls, as with the network controls, is to operate a multiple compressor system in harmony. The most sophisticated, state-of-the-art system master controls use single point control logic with rate of change dynamic analysis to make decisions regarding how the compressed air system responds to changes. These changes can occur on the demand side, supply side or in the ambient conditions – all affect the performance of the system and have a role in how the system should respond. Some of these require short duration support, such as additional storage. 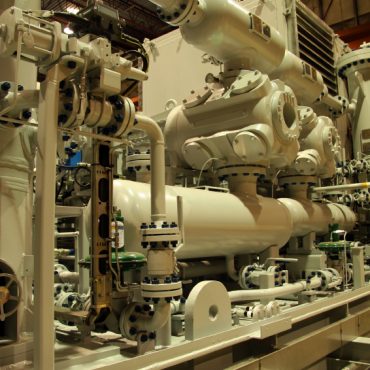