There are two types of air leaks: planned and unplanned. The planned air leaks are those that have been specifically designed for a purpose (blowing, drying, etc.). At times, these have been installed as quick fixes for a problem in a production. Some leaks are considered to be ‘coolers’ – used to cool production equipment.

The unplanned leaks, on the other hand, have something to do with maintenance issues and can be found in any part of the system. These leaks require air leak detection and repair. The most common areas where leaks occur are the following:

Leaks usually occur because of improper fittings, applications, and opening or closing. Sometimes, it has to do with poor maintenance or just worn out parts. It is easier to estimate the amount of leakage in compressor systems that have start/stop controls.

The best way to detect a leak is to use an ultrasonic acoustic detector. This recognized high-frequency hissing sounds associated with air leaks. These portable units have amplifiers, directional microphones and audio filters – they usually come with visual indicators or earphones. It is the simplest way to detect leaks because an ultrasonic sensor focuses in on the ultrasonic elements in the noise, and since ultrasound is a short wave signal, the sound level will be loudest at the leak site. Leaks can be heard even in the noisiest environments because ultrasonic detectors are unaffected by background noises.

Since leaks occur most often at joints and connections, stopping them can be as simple as tightening a connection or it can be as complex as replacing worn out equipment. Leaks, in general, are often caused by badly applied thread sealant. Proper installation should be a priority to prevent leaks. Non-operating equipment can be an additional source of leaks. Equipment that is no longer used should not be exposed within the distribution system. Another way to avoid leaks is to lower the demand air pressure of the system. Stabilizing the system header pressure at its lowest practical range will surely minimize the rate of leakage for a system.

Once leaks have been repaired, it is important to have the air compressor system rechecked and if necessary, adjusted, to have a thorough evaluation of the unit. 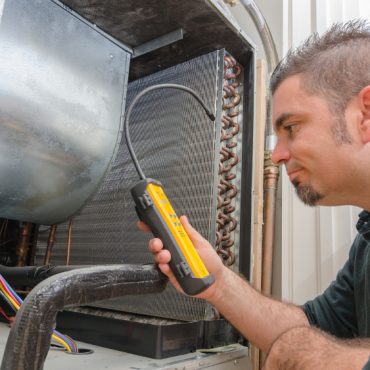